I was kindly sent a sample of the latest Jameson Caskmates. Previously, they released it in Franciscan Well Irish stout barrels. These were barrels used to age stout that had originally contained Jameson whiskey. The barrels were then sent back to Jameson who put whiskey back in to them without trying to remove the stout characteristics. The result was that the whiskey then absorbed some of the stout flavours, namely chocolate and a little caramel and you had a rather delicious whiskey.

This time, they aged the whiskey in barrels last used by Franciscan Well to age Chieftain IPA. Strangely enough, I don’t recall actually having a barrel aged Chieftain IPA before so either it was a limited release and I missed it, or else it just hasn’t been released yet. Thankfully, I had appropriate Franciscan Well glassware to house the can of Chieftain they sent me but alas, my Jameson glass has either smashed or been packed away somewhere. I picked a non branded glass for the sake of the photos. 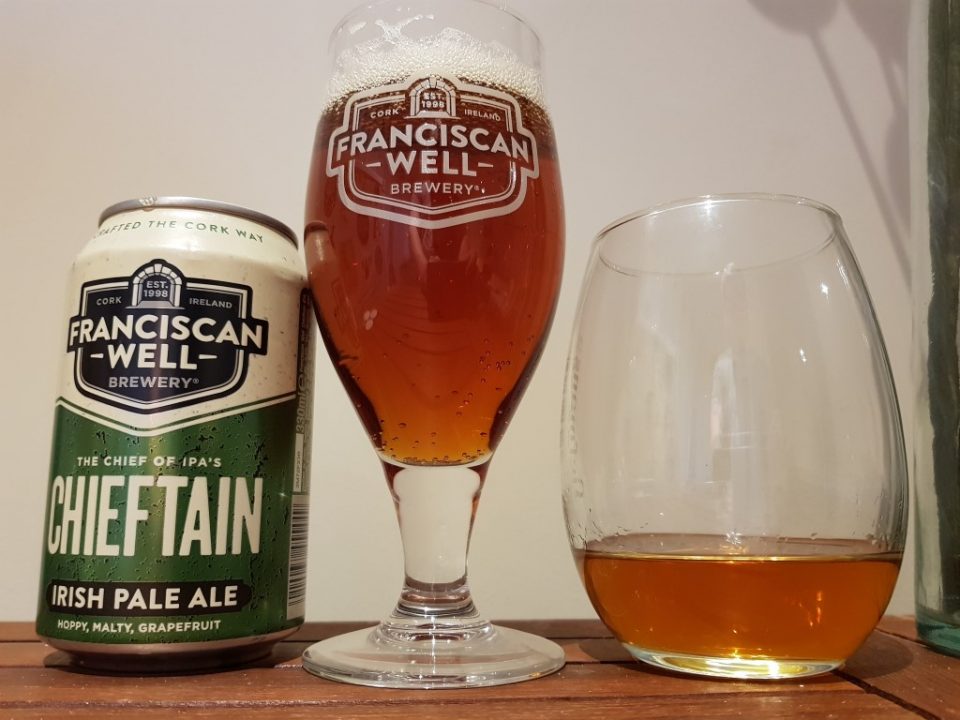 So how is it? Well, I got honey and grapefruit on nose, the grapefruit expected from the IPA influence but still rather unexpected at the same time. It’s like a mellower Jameson, Softer and slightly buttery. Pairing with Chieftain, the toffee, grapefruit and hint of butter is magnified in both drinks. Chieftain contains some butterscotch, diacetyl notes which works nicely with the beer and this really transferred into the whiskey.

In fact, I needed to compare it to regular Jameson and thankfully, Pauline had picked up a litre bottle of the stuff on a recent trip so I cracked it open to do a side by side. No need to take a picture as they look identical.

Compared to regular Jameson, the regular is sharper with more alcohol on nose. It’s fruitier with dark fruits and some orange marmalade.
Caskmates is a little thinner in body but a little oilier of that makes sense and all about the toffee and butterscotch with just that hint of citrus / grapefruit.

There are only 2000 bottles of this available, of which a few hundred are available to the on-trade and the rest is exclusive to your local O’Briens off-license for €38. In Dublin, I know for certain that Bar Rua and L. Mulligan Grocer have it on their shelves if you want to try a glass of it. Personally, I think the stout version (still available) worked a little better but it was really interesting and surprising to see some of the IPA characteristics come out. I suspect that this will work really well at Christmas time, paired with some Christmas pudding so I’ll be testing my theory in a couple of months time I guess.

Keep your eye out on social media as there might be a whiskey and beer tasting featuring Franciscan Well, Jameson and some craft beers on November 1st. It hasn’t been confirmed yet but I believe it’s happening at L. Mulligan Grocer on November 1st. Tickets, which include your beer and whiskey will be €20 as far as I’m know. Again, none of this is confirmed so for now, keep an eye out for it on social media over the coming week or two.