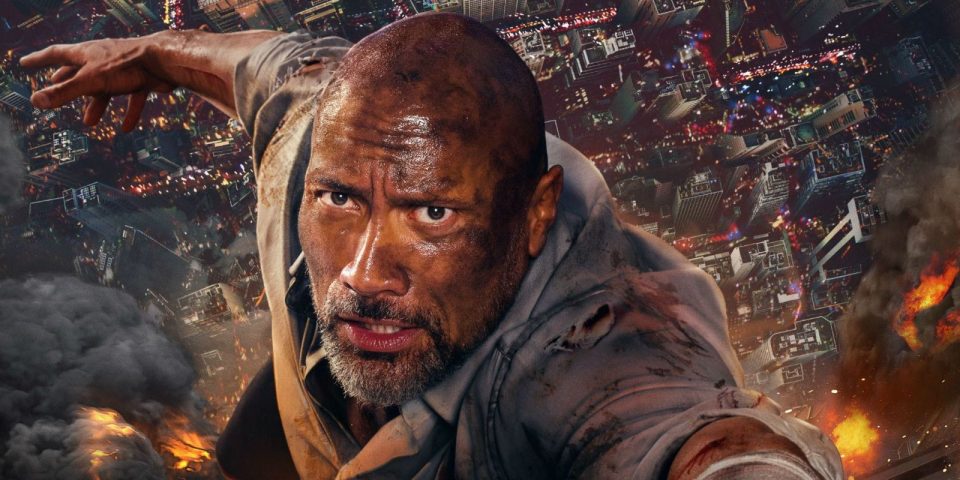 Skyscraper is the latest Dwayne “The Rock” Johnson disaster movie. I went with my Dad and Nephew last night knowing very little about the movie other than the obvious. It clearly looked like a cross between the Towering Inferno and Die Hard. I went in to the movie under no illusions that this would be anything more than a popcorn fest, despite the fact I don’t usually bother with popcorn.

There will of course be spoilers below.

The premise of the movie is pretty simple on the face of it. Bad guys set the tallest building in the world on fire and The Rock has to save his family. Of course setting it on fire isn’t good enough, they also storm the building in order to get what they came for.

As plot holes go, this movie must be up there with the best of them in terms of the number of them but let’s start with the one that was the most obvious to me. The Rock’s character, Will Sawyer is hired to test the building security for an insurance company. For some reason, the whole building’s security is controlled by a single tablet which has been bio-metrically locked to Will’s face using facial recognition. Will’s old friend has ensured that he gets the insurance gig so he can betray him by distracting him and his family for the bad guys to steal said tablet.

The bad guys perform their duty and steal his bag, assuming it contains the tablet. That was the entire root of their plan. Steal the tablet from him. Will should have been safe. Will’s family was supposed to be at the zoo and not in the building. With me so far? So no one in Will’s family was supposed to be hurt and the tablet simply stolen in order for the bad guys to use it to do bad things with the building. Here’s the problem, since their plan was to simply steal the tablet, how were they meant to unlock it? It was bio-metrically locked to Will! He needed to unlock it first.

The plot holes go downhill from there I’m afraid.

The movie is preposterous but here’s the thing, it’s not really trying to be anything more than what it is. It’s an action movie full of spectacle. It’s a rare movie where the main hero is a cripple. Will lost a leg when he was an FBI agent so the movie makes great use of his prosthetic limb. It has a tendency to fall off. I’m only disappointed he didn’t pick it up off the ground and beat a bad guy over the head with it.

If we inevitability compare this movie with Die Hard, we can see why Die Hard has endured all this time and Skyscraper will be forgotten. Bruce Willis as the hero is far more inspiring. He’s one man with no shoes in a building he’s never been in before trying to save his wife from the bad guys. Bad guys I might add who have a normal reason for being there. Simple greed and theft. I still don’t fully understand what the bad guys were trying to do in Skyscraper. It involved some odd master USB key which much like the ring of power in Lord of the rings, seems to control a bunch of other USB keys with incriminating information on them. One USB key to rule them all doesn’t have the same poetic ring to it though.

Unlike John McClane, Will Sawyer knows the building inside and out. The only person who knows it better is the person who designed it. That means the bumbling bad guys never really stood a chance against their one-legged antagonist.

Oh, and did I mention the duct tape? From fixing gaping wounds to helping him stick to the side of the building before elaborately jumping through spinning wind turbine blades so he can, wait for it, open a locked door? Duct tape can do it all, except to patch all the plot holes in this movie of course.