Night Photography – Trying to Capture the Milky Way – Part One

Last week, I headed to Glendalough in the evening to try some night photography. It was a clear evening as I drove south. I had read that Glendalough/Laragh has perhaps the darkest skies closest to Dublin and since I was already running an errand in south Dublin, I figured I could keep going.

When I arrived, darkness had mostly fallen but it was still a little bright out. A long exposure pretty much looked like daylight with the moon looking like the sun. That wouldn’t do me much good so I walked to the Glendalough hotel to kill an hour or so. I had already eaten dinner a few hours before so I ordered a dessert and a coffee and over an hour later, I headed back to set up my camera. 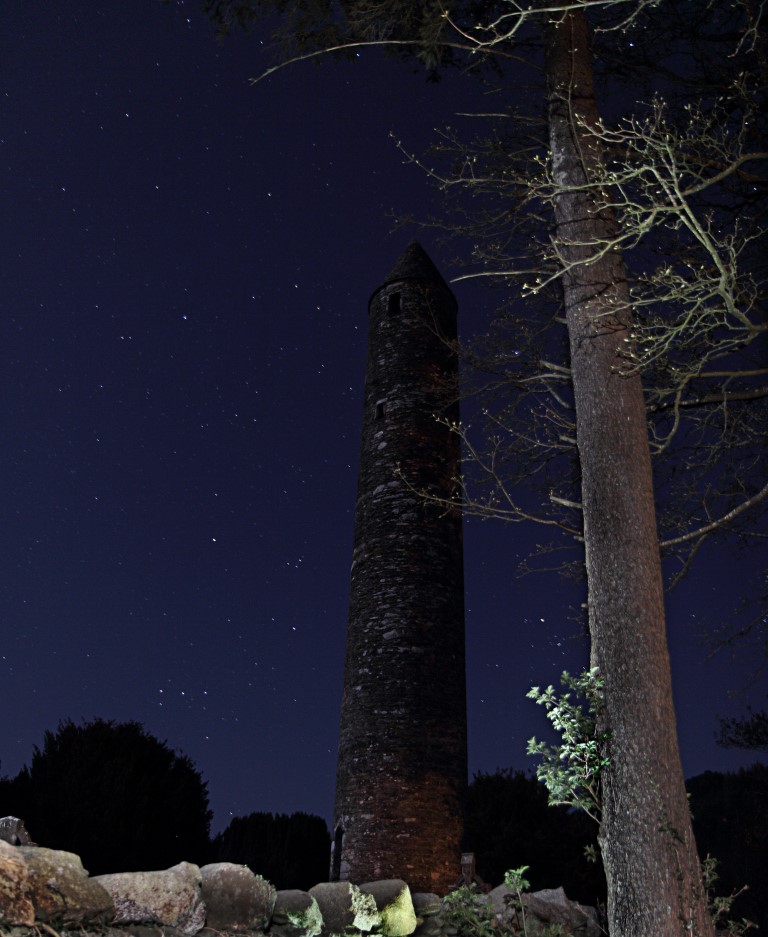 It was now fully dark so I needed the light from my phone to guide myself. I used the light on my phone to paint light on the tree and rock wall while leaving the shutter open. I discovered pretty quickly that night photography is very difficult. For one thing, I can’t see anything through either the viewfinder or the LCD screen.

I had to use best judgement along with light from my phone. I also brought a laser pointer so I could try and manually focus on the red dot. 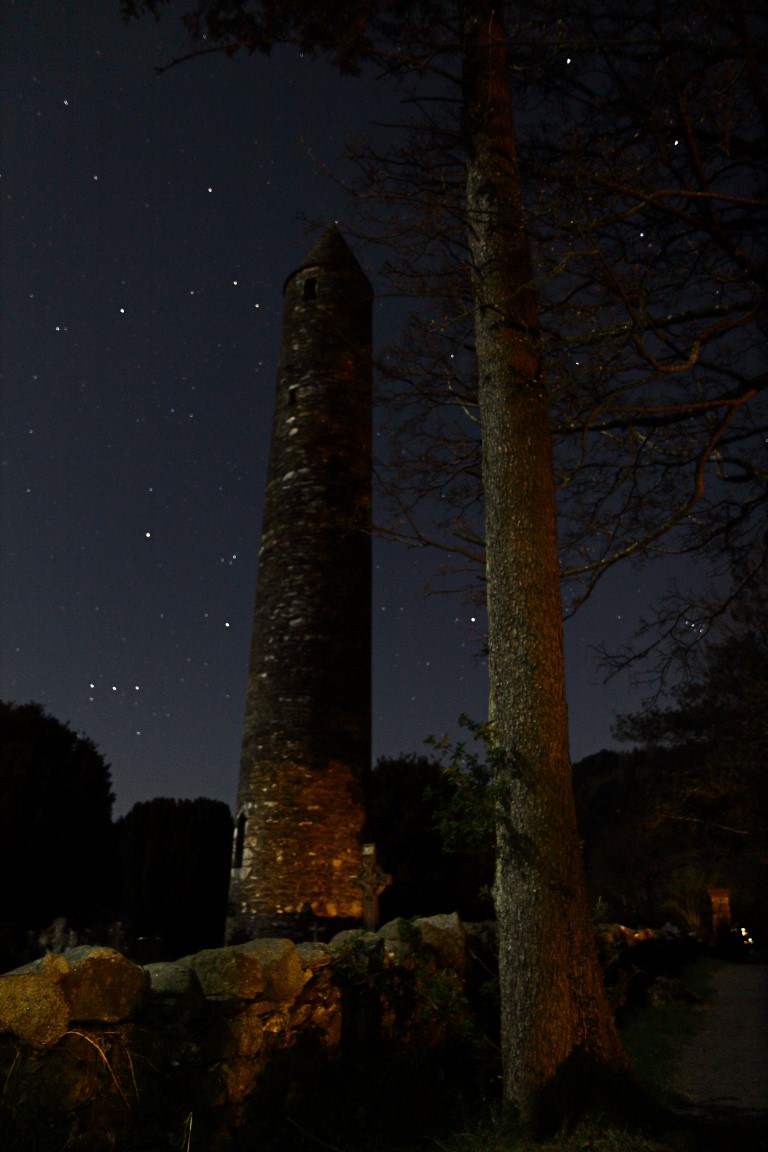 Focusing was still very difficult but I suspect I will get a lot better with more practice. What I did notice after looking at the images on a computer screen was I still got the timings wrong. She exposures were mostly 30 seconds with the odd 15 second exposure and even still, I can see some star trails. In case you aren’t familiar with what I mean, let me explain. The earth is not only moving through space, it’s also rotating and because of this, the stars appear to change position during the night. You’ve probably seen the extreme effect if looking at really long exposure where someone has aimed the middle of the camera on Polaris, the north star and all the stars trail around Polaris. Here’s a random example of what I mean. 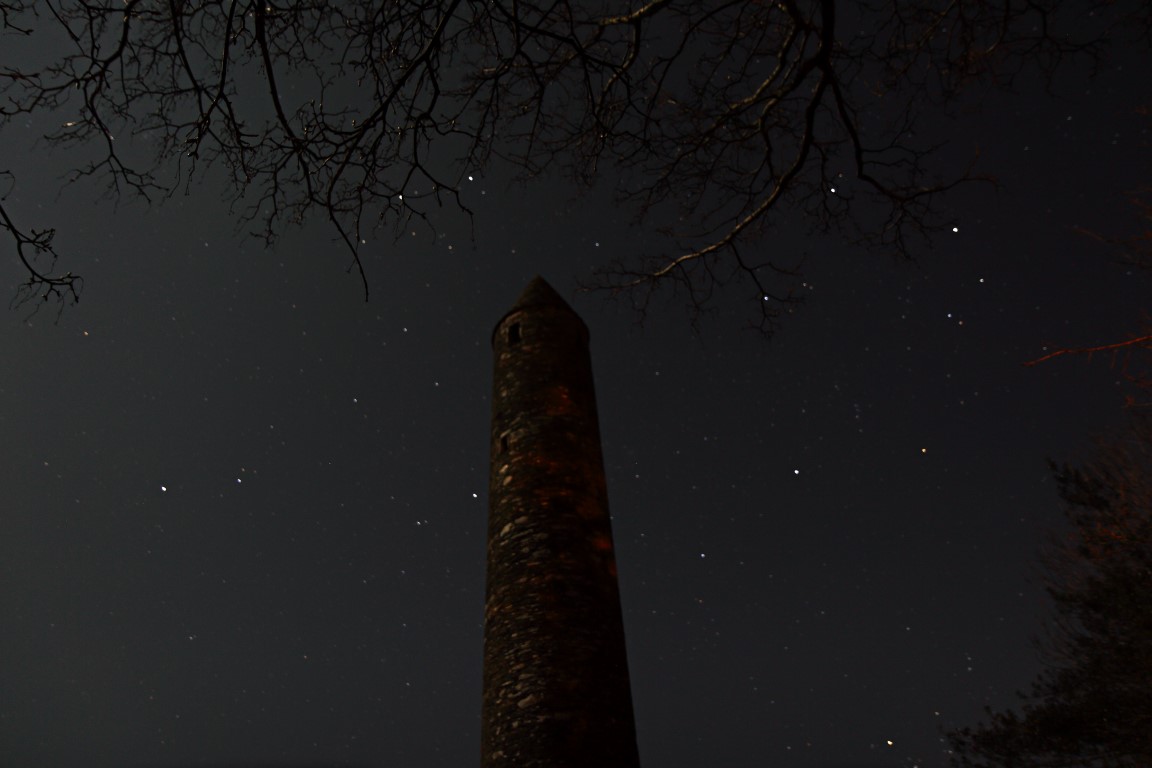 For what I’m trying to do, there should be no star trails. All the stars should be perfect circles or dots. What I was hoping to capture of course is the milky way. Unfortunately, even though it was a crystal clear night, the moon was practically full so I’m missing a lot of stars.

I’m also partially let down by my equipment. My Canon 700D is a cropped sensor DSLR so will not be as good at light collection compared to a full frame camera. My best lens is my 17-55mm 2.8 throughout so I opened the aperture all the way but I would be better off with a 1.8 or even 1.4 wide angle lens. 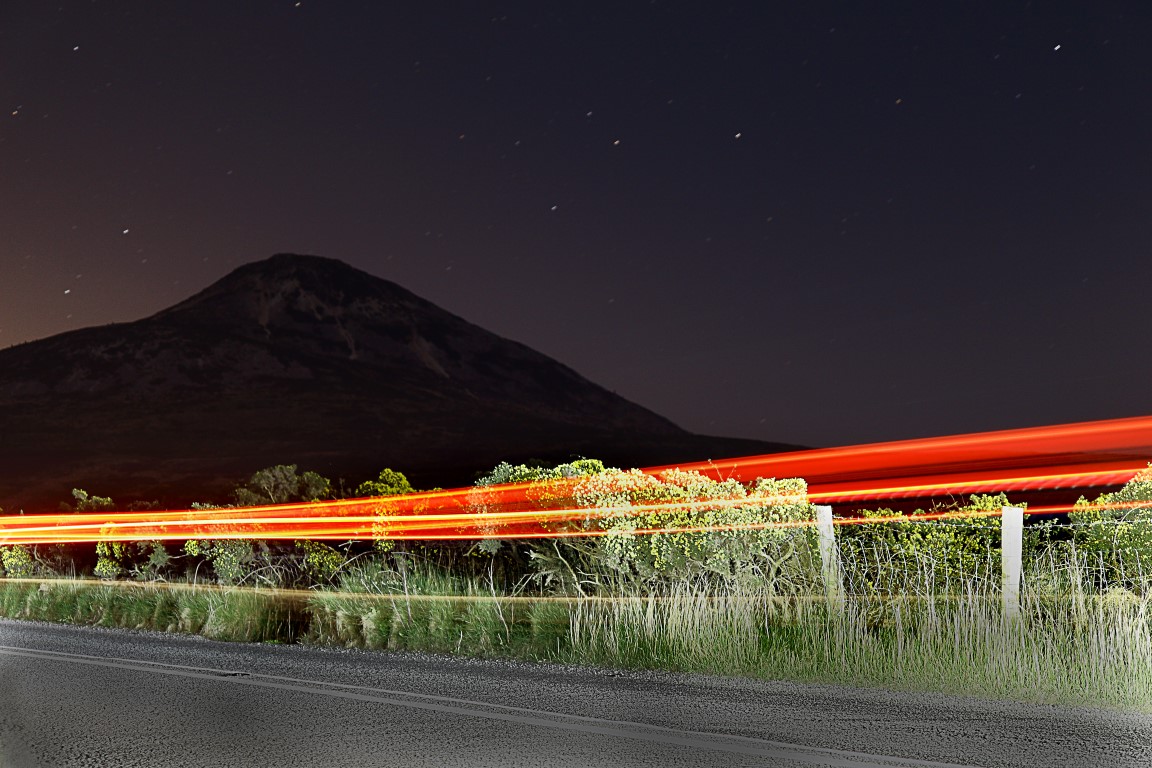 After I had taken my fill of shots at Glendalough, I drove back towards Dublin. I had a shot in mind though. The Great Sugarloaf just off the N11 dominates the local skyline. I had decided to take a picture of it as I drove past it earlier but it was too bright. Now it was just perfect. I pulled in to the side of the road and set up my camera and waited for a car to come past so I could capture its lights as it drove past. Unfortunately I was now closer to civilisation so there were far lass stars visible. 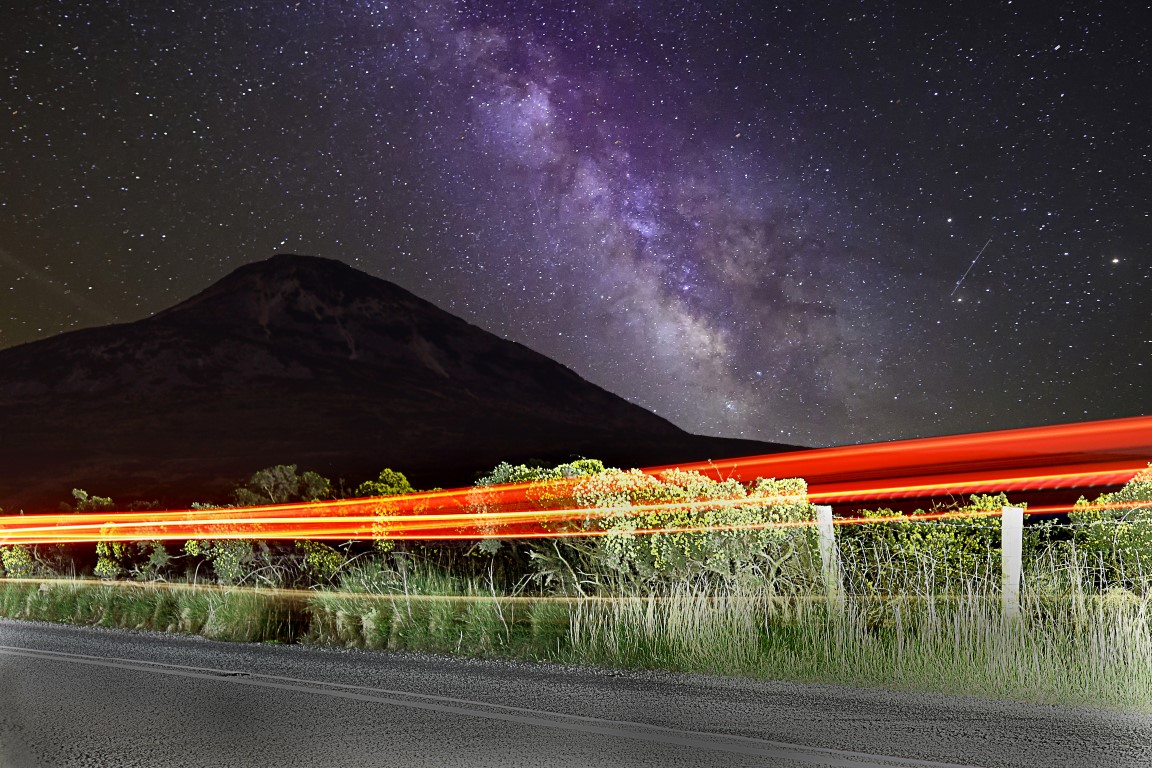 The above shot is what I was actually trying to achieve however. This is the same shot where I’ve replaced my dull sky with a proper shot of the milky way from a royalty free website. I did that using photoshop but any image editing software can do the same thing. I’m not sure this particular shot is technically possible to do naturally due to the light pollution from Dublin but it’s certainly achievable with my equipment and a really dark sky. I did once see the milky way from Dun Laoghaire pier. That was in 2003 and I was astonished I could see it with my own eyes being right there in Dublin. I would say with urban sprawl, that’s no longer possible.

I hope to get out again for some night photography sometime soon. Unfortunately the best time to see the milky way in Ireland is during the summer where it stays bright until after 11pm and true darkness isn’t until well after midnight.