I went along to see the musical production of Sister Act this week. It was my first time going to the Bord Gáis Energy Theatre in Dublin. That’s a horrible, mouthful of a name for a theatre so I’m going to refer to it as the BGE theatre. 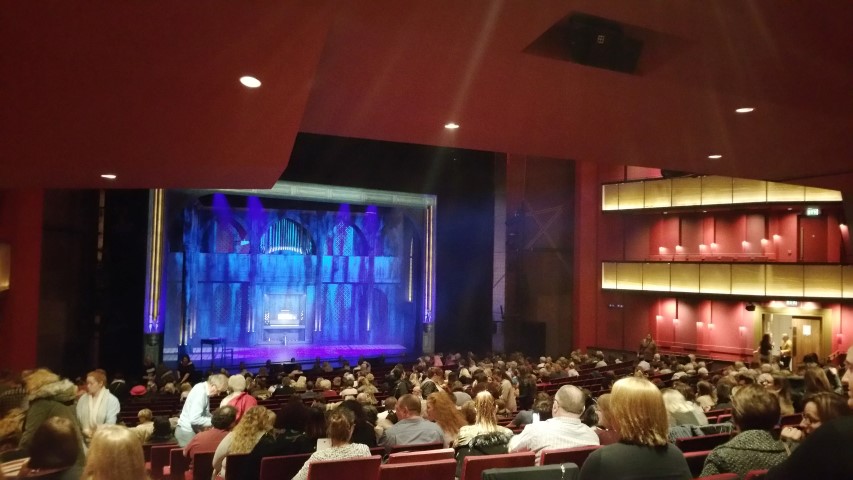 The BGE theatre is Ireland’s largest theatre with a capacity of 2111. I was pretty far down the back and the stage looked quite small but having just compared the specs to Her Magesty’s Theatre in London where I saw Phantom of the Opera, it’s actually a fair bit bigger.

So, on to the musical itself. The first thing I will say is that if you go to the Sister Act musical because you loved the movie and are looking forward hearing your favourite songs from the movie, be prepared to be disappointed. Not one single song from the movie has been included. Instead, we have a completely original score by Alan Menken who did Disney’s Aladdin, Beauty and the Beast and Enchanted.

They have also changed some of the story. The whole musical takes place in Philadelphia in the late 70s rather than Reno and then San Francisco in the 90s. This was done as an excuse to use disco and motown music I’m guessing.

The headline for the show is Alexandra Burke who apparently won X Factor at some point. I had never heard of her myself but others had. She was actually very good with a powerful voice.

There were a few scenes that I found disjointed, maybe it was just me but I just didn’t see the relevance. The musical had got off to a slow but chuckle inducing start but it picked up pace when Sister Mary Clarence took over the choir.

One little gripe I had was the scene changes. They seamed lazy because the background never changed from that of inside the church. Instead, some chairs or a bed were rolled out. In a scene that led from inside a bar across the street from the convent to the outside of that bar, all that indicated we were outside a bar was a sign that came down which said bar in flashing neon lights. Having looked at some YouTube clips from past performances, I see they used different backdrops which changed during different scenes and it just seems more polished. The current set changes just reminded me of something I might see in a school production.

Aside from a few disjointed scenes and cheap sets with lack of changes from scene to scene, the performance was excellent and the crowd were kept engaged. The standing ovation at the end was instant and deserved with the biggest cheer for Alexandra as you might expect.

If you enjoyed the movie, go and see it but don’t expect to hear the same songs as the movie. I enjoyed it myself and so did everyone else I was with. We have all even decided to watch the movie again.